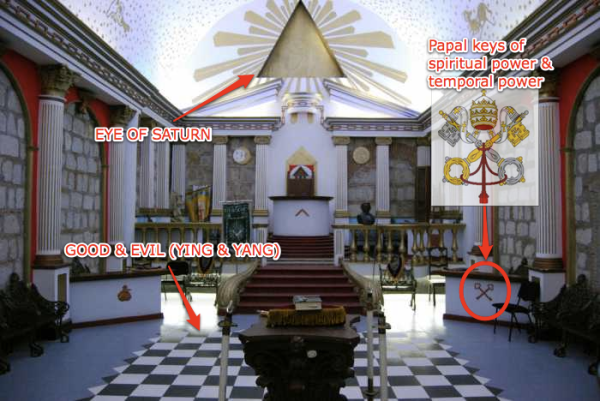 The masonic checkerboard shows up in various music clips that we see in pop culture. It represents duality: black x white; positive x negative; knowledge x ignorance; illumination x darkness; good x evil; etc… The 3rd Dimension is based on dualistic thinking. So when masons make sure their symbology is seen in every public display, they are trying to re-enforce our subconscious to accept the idea that duality is the ONLY way to experience reality.

That is why the persecution of gays has existed in almost every country in the world up till the end of the second millennium (and still going strong nowadays in many many countries, controlled by “free”masons). They want to impose a certain specific belief system regarding reality. AS IF we were only “black and white”. As if the gradient nature of reality was NON-EXISTENT.

Of course we, the aware ones, know it is all a lie. But many people buy into their games and insist that the right way to live is only “man x woman”; “masculine (white) x feminine (black)”. With the feminine being the darker aspect of the symbology – which is very telling by itself.

Here is another example of the masons making it very clear who is behind dictating the symbology that appears in YET ANOTHER pop video clip… If you don’t know the symbology, you would never ever guess that there is a darker component behind all the happy feelings that the music – by itself, without masonic symbology of course – brings to you!

In other words, they managed to infiltrate a truly positive, creative piece of music into yet another reinforcement of their religious world view. What I name as: The Masonic Matrix. Since it is literally everywhere around us.

Masons themselves will deny it, saying that they are not a religious organization, but they sure act religious when infesting our planet with their symbology “hidden in plain sight” as they themselves say…

So find the masonic checkerboard symbology in the video below!! (Watch in 720p definition…)